My grandmother has a ministry in Mabini, Bohol, Philippines, so I spent two days in Bohol with her and her pastor’s family. It was a unique experience because while I got to spend a substantial amount of time with the locals, I also attempted to do some touristy things, which led to some interesting stories.

History: The entire island of Bohol used to be submerged underwater and covered in coral, but as the sea level decreased, Bohol rose and became colonized by the Austroloid people, and like the rest of the Visayas region, was eventually colonized by Spain.

The island now is known for its geographic features (half of it is covered in limestone and it has a hilly terrain) and tarsiers.

One of the more popular destinations on the island is Panglao, known for its white sand beaches. Since I had limited time in Bohol, though, I decided to skip it for other experiences. 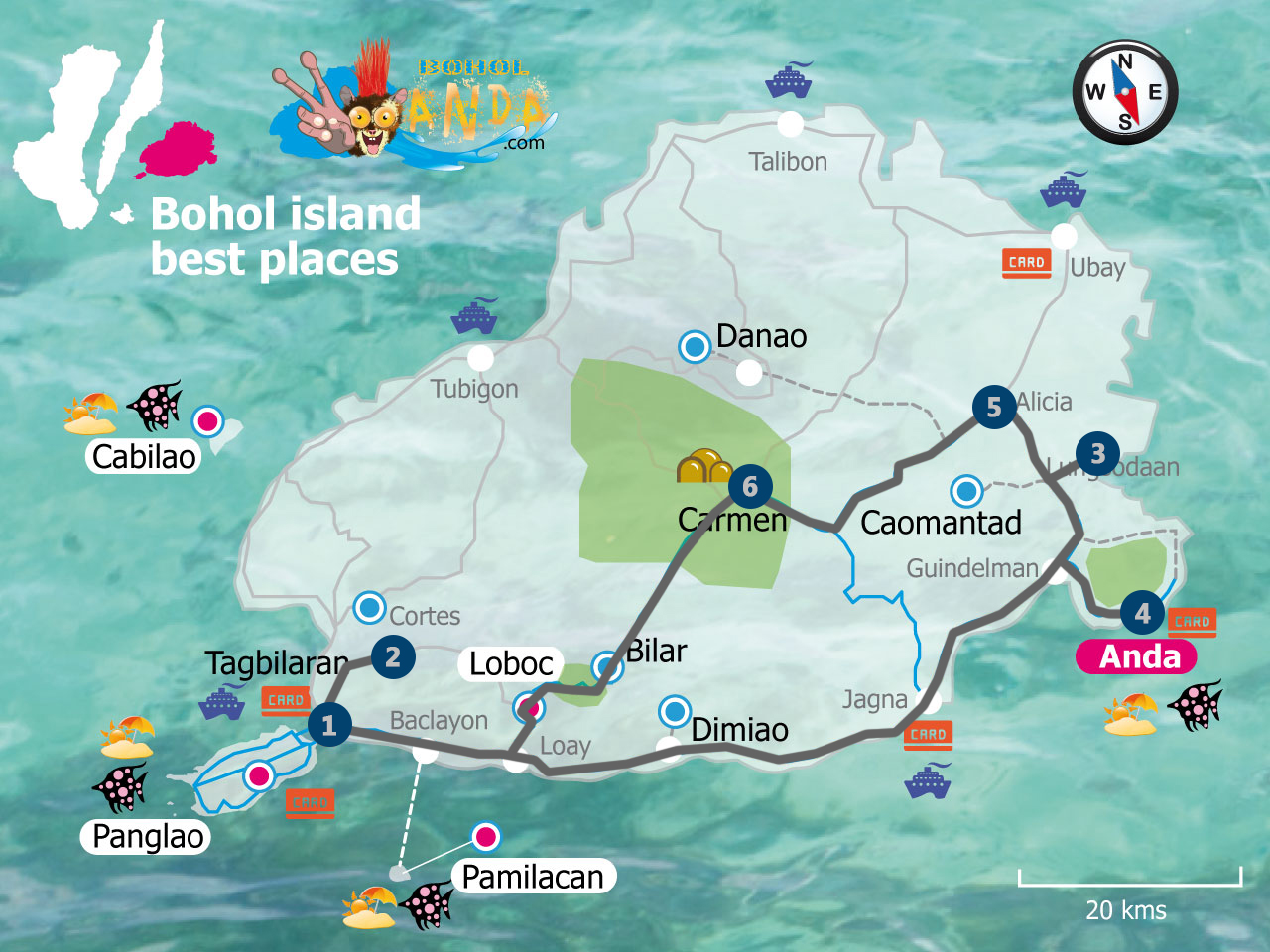 1. Traveling to Bohol from Negroes

There are several ways to get to Bohol by sea, with the main port located in Tagbilaran. My grandmother and I were traveling from the west from Dumaguete, Negroes by fast craft, which took about two hours. The pastor met us at the port, and after grabbing some dim sum for lunch, we headed to the Philippine Tarsier Sanctuary, located 30 minutes away from Tagbilaran.

The cheapest way to get to the sanctuary is by bus (there are buses that run along all the main roads in Bohol) However, since my grandmother was traveling via walker and we had some luggage, we opted to take a taxi which cost about PHP800 (in my opinion, way too much).

2. The Philippine Tarsier and Wildlife Sanctuary 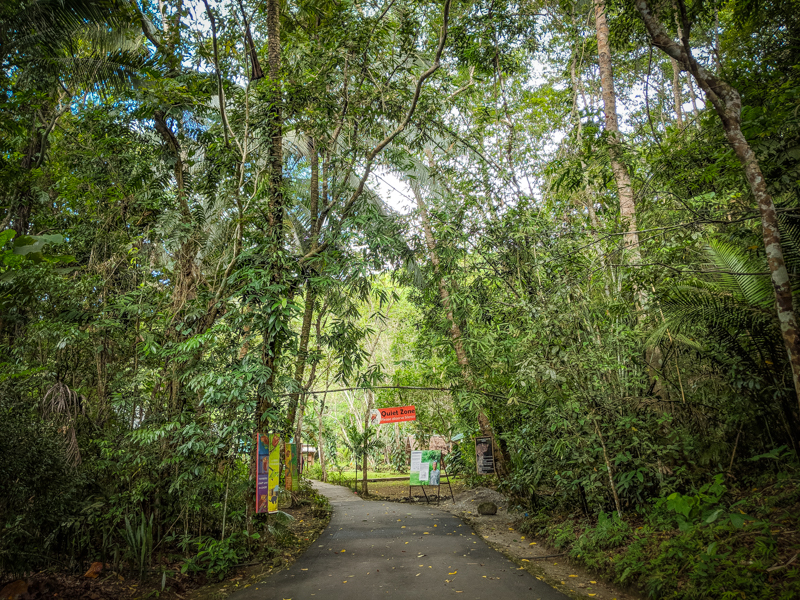 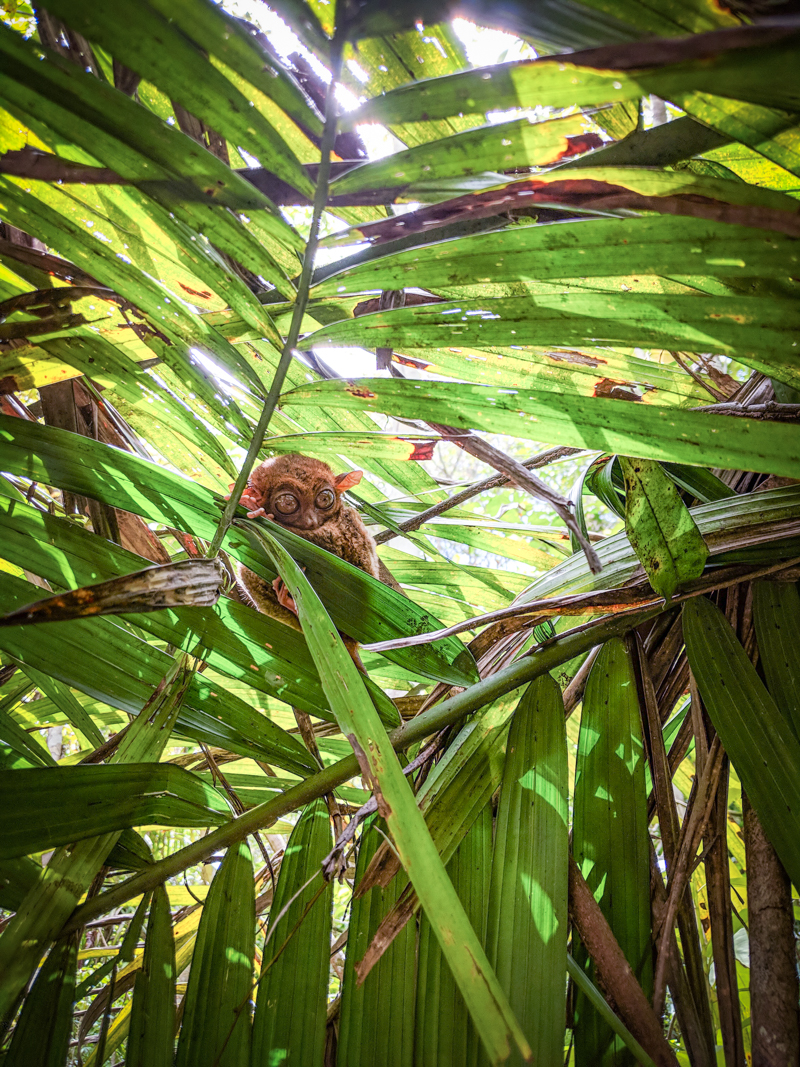 The tarsier is an endangered species that only exists on a handful of islands in the Philippines, as well as on Borneo. Due to predators, illegal hunting, and rainforest destruction, their ability to live in the wild has greatly declined. The Philippine Tarsier and Wildlife Sanctuary, located in Corella, Bohol, has replicated the tarsiers’ natural environment and has provided an area that facilitates survival for newborn tarsiers (tarsiers can only have one birth a year, making it difficult for them to repopulate). 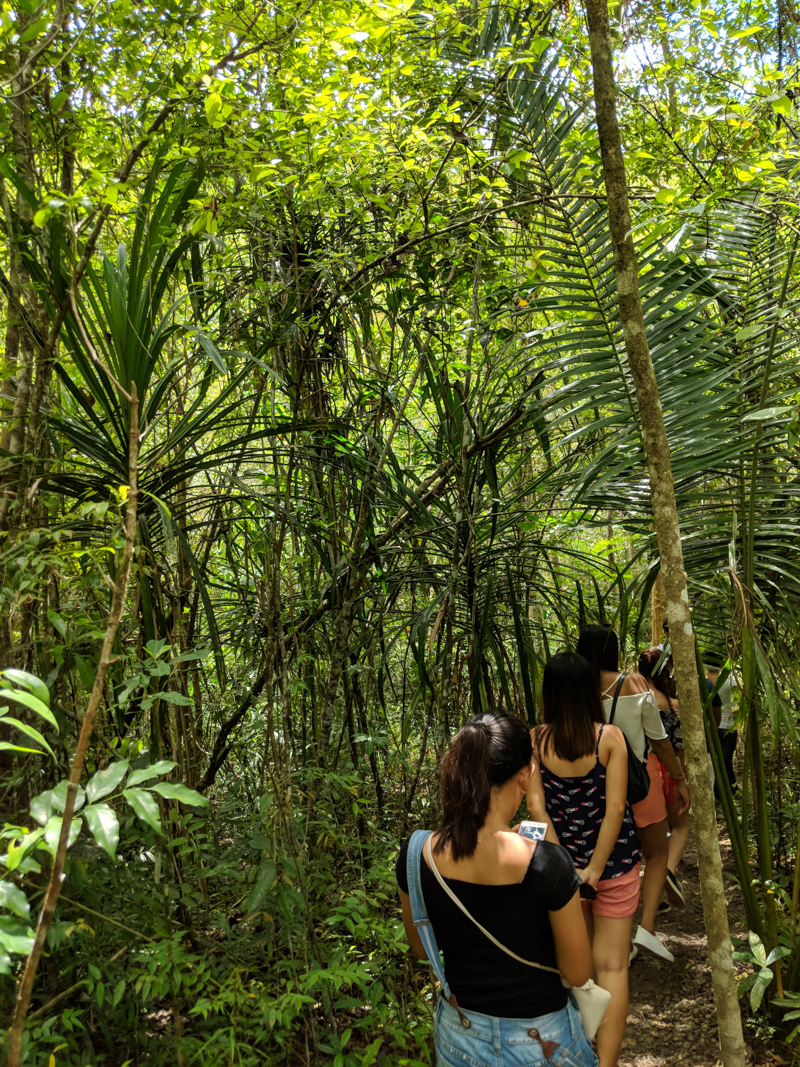 While the sanctuary in Corella has over 100 tarsiers in possession, they limit the number of tarsiers available for viewing to eight, and they limit the amount of time and number of people allowed in the sanctuary. Tarsiers are easily stressed out and are known to commit suicide if they are put under too much pressure.

There is another more popular tarsier viewing place in Loboc, but I’ve read that the conditions of the tarsier living environment are very poor and they don’t limit tourism, creating a stressful space for these sensitive creatures.

After visiting the tarsier sanctuary, we headed back to Tagbilaran to catch a private van to Mabini. And when I say private van, I mean a 20 seater with no room for luggage that doesn’t leave until full. This has now become my life.

The journey from one end to the island to the other is a little over three hours. We got to Mabini around dinner time. 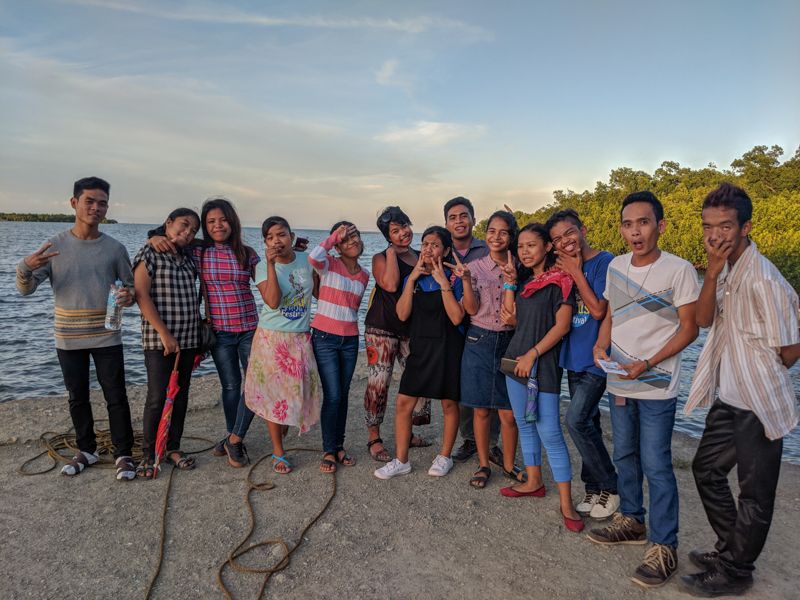 My grandmother’s ministry is also a community center for the local kids in the village, and it was pretty cool getting to know all of them. The ministry provides them with space to meet for meals, host fellowship, and hold band practice, which is a much needed amenity for a village of their size.

On the second day, the pastor and I walked to a nearby fishing village with the kids. Mangrove trees lined the water along with houses made of coconut trees. Some of the kids picked tambis, a fruit native to Bohol with an apple-like texture, for me to try. 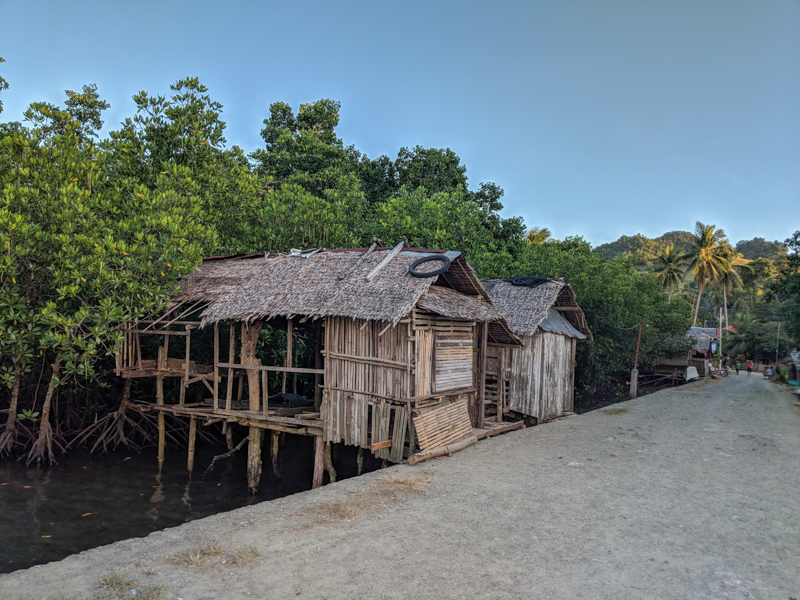 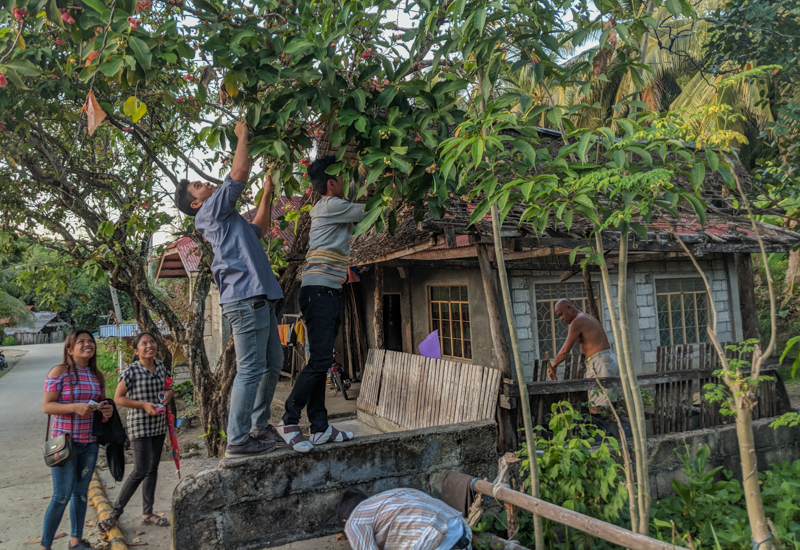 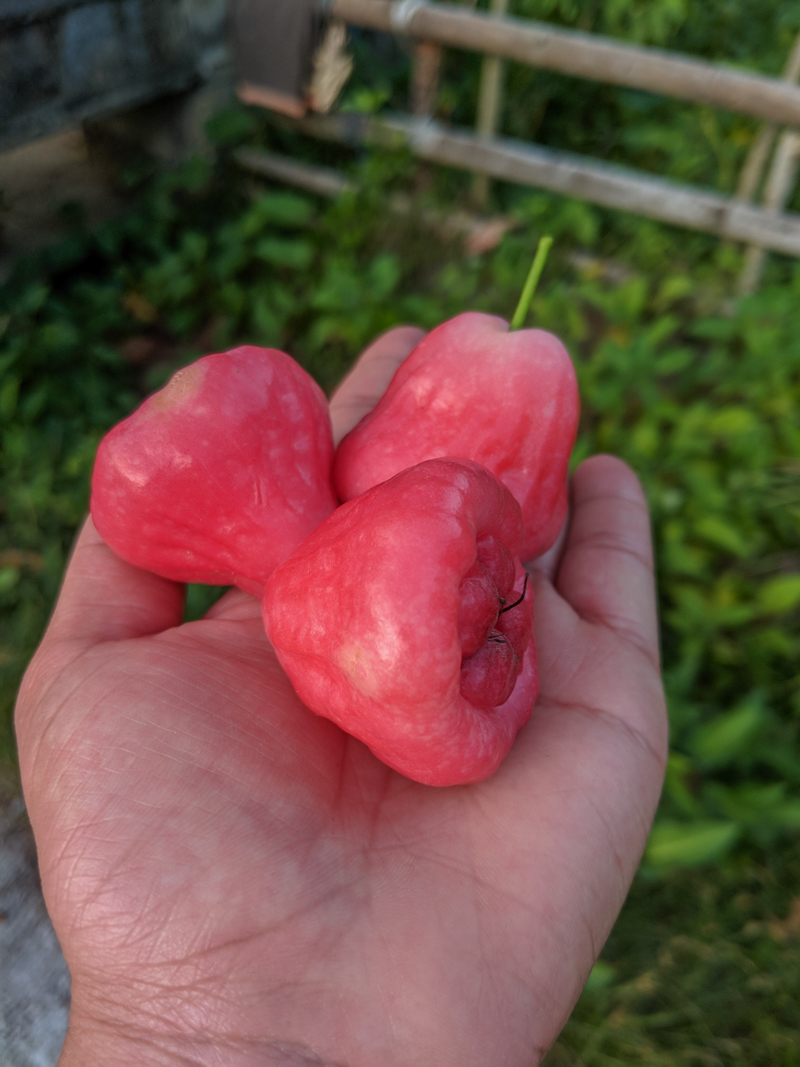 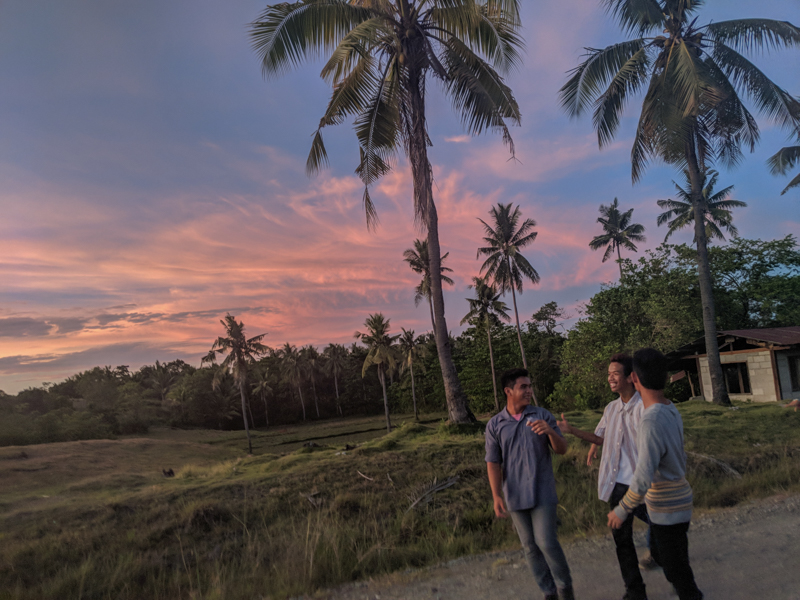 Per usual, the sunset was beautiful. I’m glad that Mabini has a space like the ministry for those kids to grow up in. Something I haven’t really shown too much on this blog is how impoverished most of the Philippines is. You can watch a gorgeous sunset on a beach resort one minute, then you turn the corner and there’s a pile of trash with a goat floundering around in it. Tourism makes money, but it’s tough for Filipinos to become gainfully employed. Despite all of the challenges, though, Filipinos are so ridiculously optimistic. I’m proud to be Filipino.

Initially, I wanted to mountain bike in Anda. What ended up happening is a completely different story.

Anda is located an hour south of Mabini, and the pastor found a friend, Domingo, with a motorbike who was willing to drive me down there. The catch? He only spoke Bisaya. I only speak English, and my google translator acts like the only dialect in the Filipino language is Tagalog. So after driving around aimlessly for a few hours, unable to understand each other, we both gave up and went back to Mabini.

But if I’ve learned one thing on this trip, it’s that Filipinos are resilient! The next day the pastor found a guy, Felix, from Anda who could help navigate me and Domingo to the places I wanted to go. The catch? He only spoke Bisaya as well, so once the plan was made, there was no turning back! The added bonus was that I had to get back to Tagbilaran to catch a ferry to Cebu that evening, and that began my adventure across Bohol with the locals!

So our plan was to go to the Anda cavepools for a photo op, then head up to Lamanok Island for a three hour tour. Afterwards, they’d drop me off at the bus station in Alicia, and I’d catch a bus to Carmen to see the Chocolate Hills. I wasn’t sure how I was getting to Tagbilaran after that, but I figured I could get to that later.

The three of us hopped on the motorbike (I’ve seen families of five and their pets easily fit on one motorbike, so 3-in-1 is nothing) and started the journey to Anda.

Luckily, Felix had the foresight to find someone who spoke English to help translate, so we stopped by his family’s house to see if any of his cousins wanted to tag along. Ludio was free, but we spent so much time visiting at the cousins’ house, we had to skip the cavepools and go straight to Lamanok.

The four of us headed up to Lamanok Island, a place in Anda known for being one of the oldest burial grounds in the Philippines. Native tribes used to present sacrifices to the gods there, and the island still had remains of many of the people who were sacrificed. 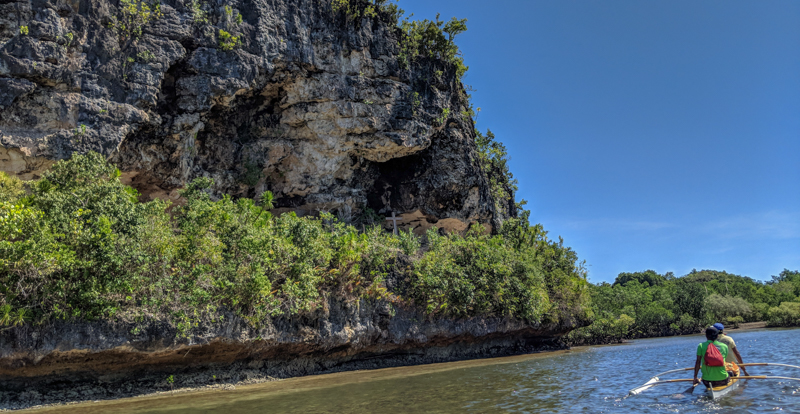 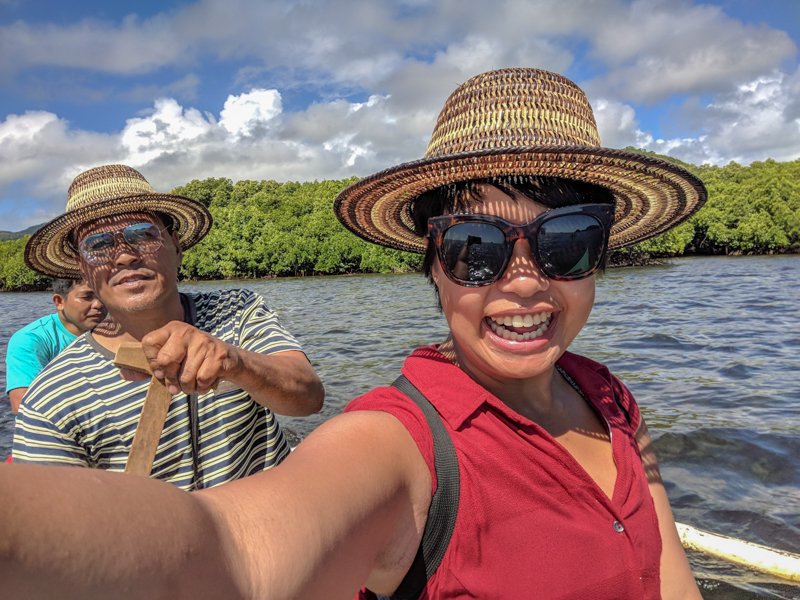 They insisted I wear this hat to protect me from the sun.

Ludio, Felix, and I hopped on a boat with our guide, who gave us a full tour of the island and its caverns. At some point, we ran into a woman from Australia who had been dropped off by one of the boatmen and told to look for the guide.

As she and I followed the guide up one of the trails, I explained why I had three Filipino men following me around the island, and she replied, “I’m not surprised. I met a priest on a tricycle yesterday, and now he’s been my personal tour guide.” 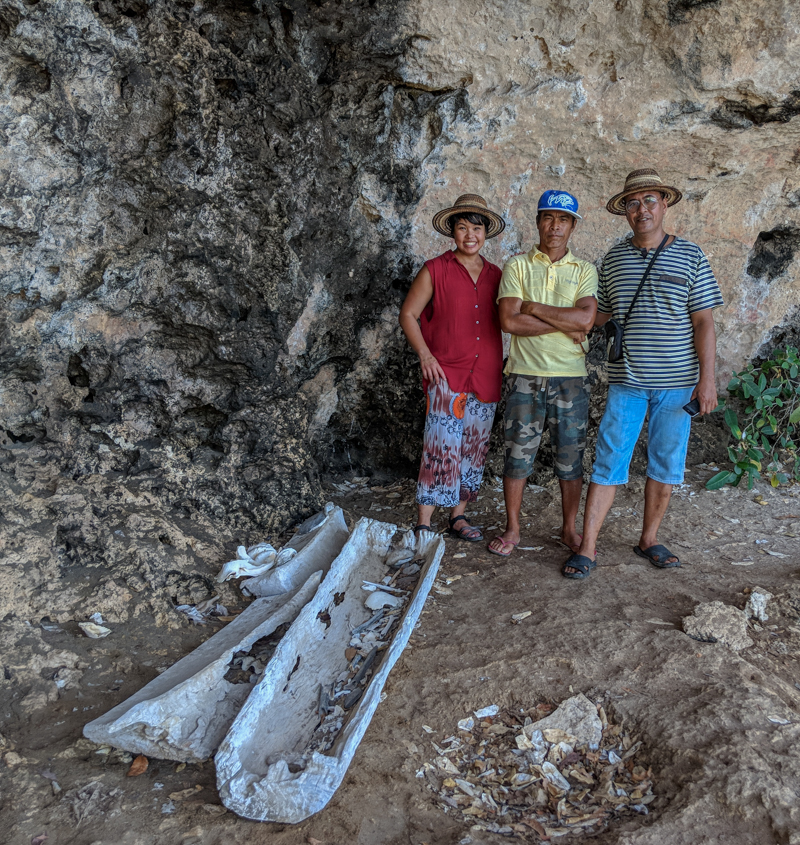 Posing with a tomb of actual bones 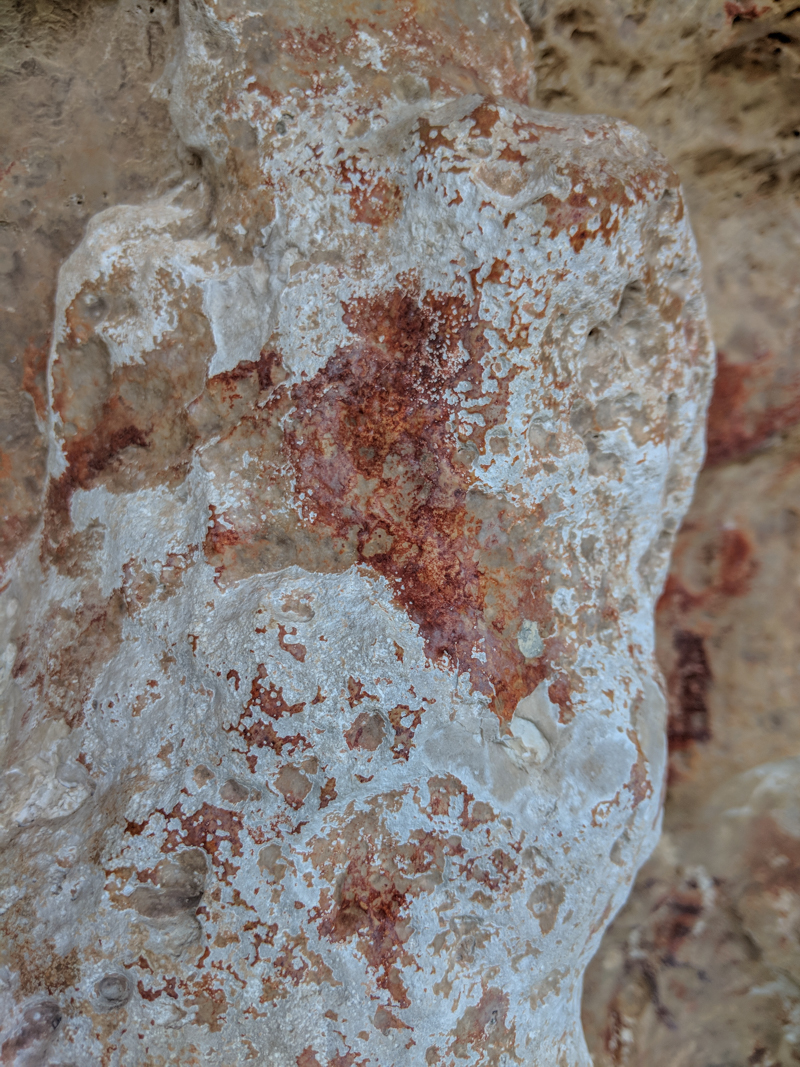 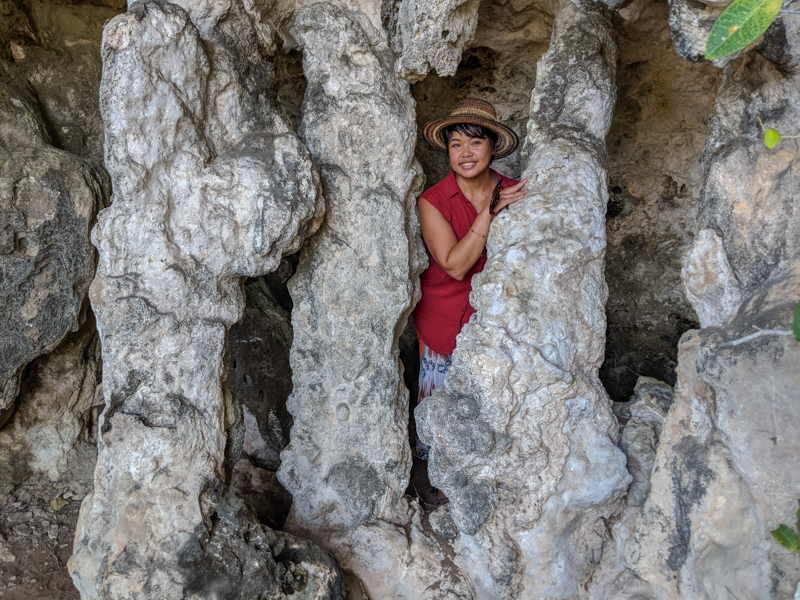 Our guide had a lot of jokes that involved rock formations looking like dicks and vaginas and had me pose with a bunch of them. I am not posting those pictures on the internet, so here I am with rocks that don’t look nearly as phallic. 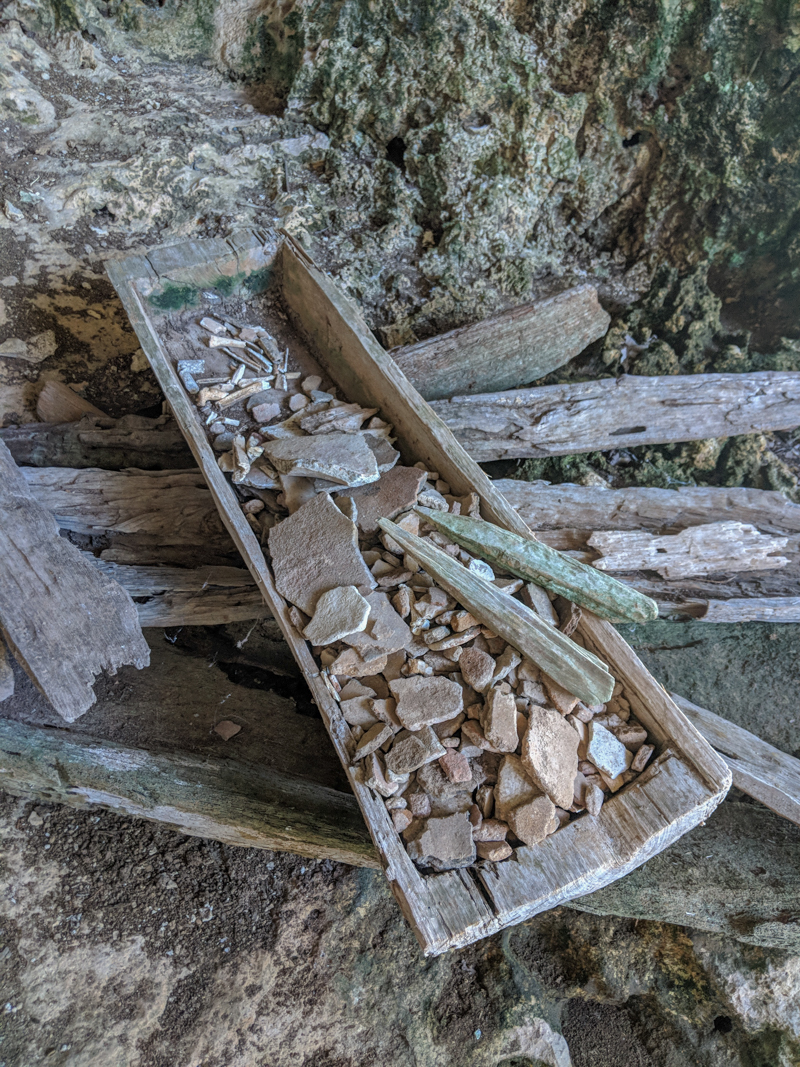 Pieces of bones and ceramic jars

The tour ended in one of the caverns where the locals apparently still hold ritual animal sacrifices on a weekly basis. 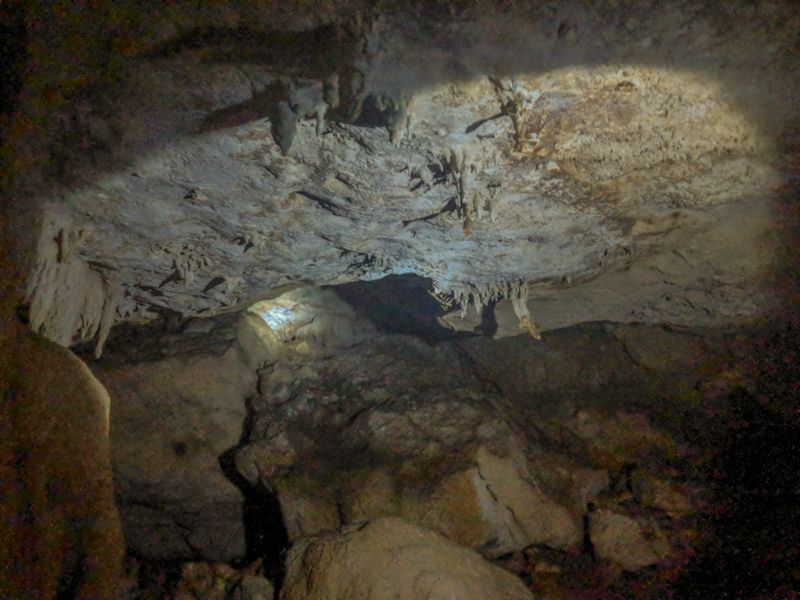 Both myself and the Australian felt weird juju coming from the cave, so we promptly left the island after that.

5. Catching the Bus at Alicia

We said goodbye to Ludio and headed an hour north to Alicia so I could catch a bus to Chocolate Hills. I had thought that this would be an actual bus stop, but it was really just a hut on the side of the road that one of Domingo’s friends was chilling out in. He spoke a little English and asked me to give him money because he was Domingo’s friend, and I aptly replied, “Dude, you haven’t done jack shit.”

So the group of us sat there as Domingo’s friend chainsmoked and Felix bought the group two liters of beer with the cash I gave him for navigating. Thirty minutes later, a bus came roaring around the corner and the guys pushed me up and started yelling at the bus to slow down.

I ran after the bus and jumped on, and that concluded my adventure with my newfound Filipino friends.

An hour later, the bus reached Carmen, the location of one of the more well-known tourist destinations, Chocolate Hills. I had chatted with my seat mate for a bit in really broken Bisaya (I had the sense to learn the following phrases before setting off on this journey: “I am a foreigner.” “I only speak English.” “Where is…” “I am going to…” “I am sorry.” “Thank you.”) so she knew where I was going and helped me yell at the bus driver to stop. Man, Filipinos love to yell. 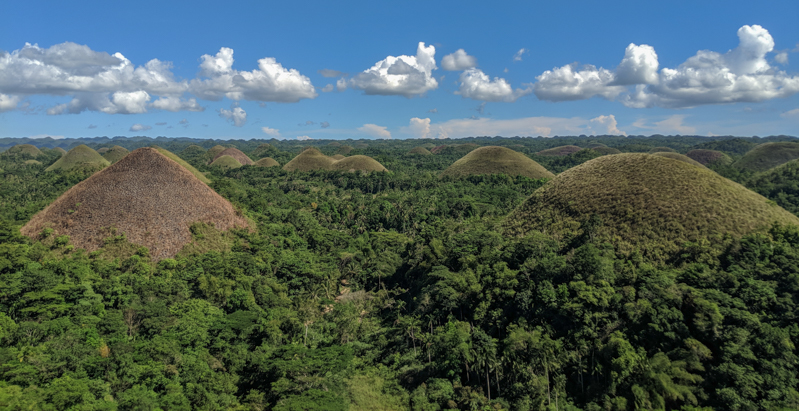 Chocolate Hills, despite their name, are not made of chocolate. They earned their name from the brownish tint they get during the dry season. As I mentioned before, Bohol used to be completely underwater, so Chocolate Hills are actually covered in dead coral.

Most people hitch a ride via van or motorbike to the top of the viewing area, but I opted to walk the full 10 minutes to get to the top, which earned me a lot of weird looks (Filipinos also don’t like walking. I don’t understand. I guess the heat?). 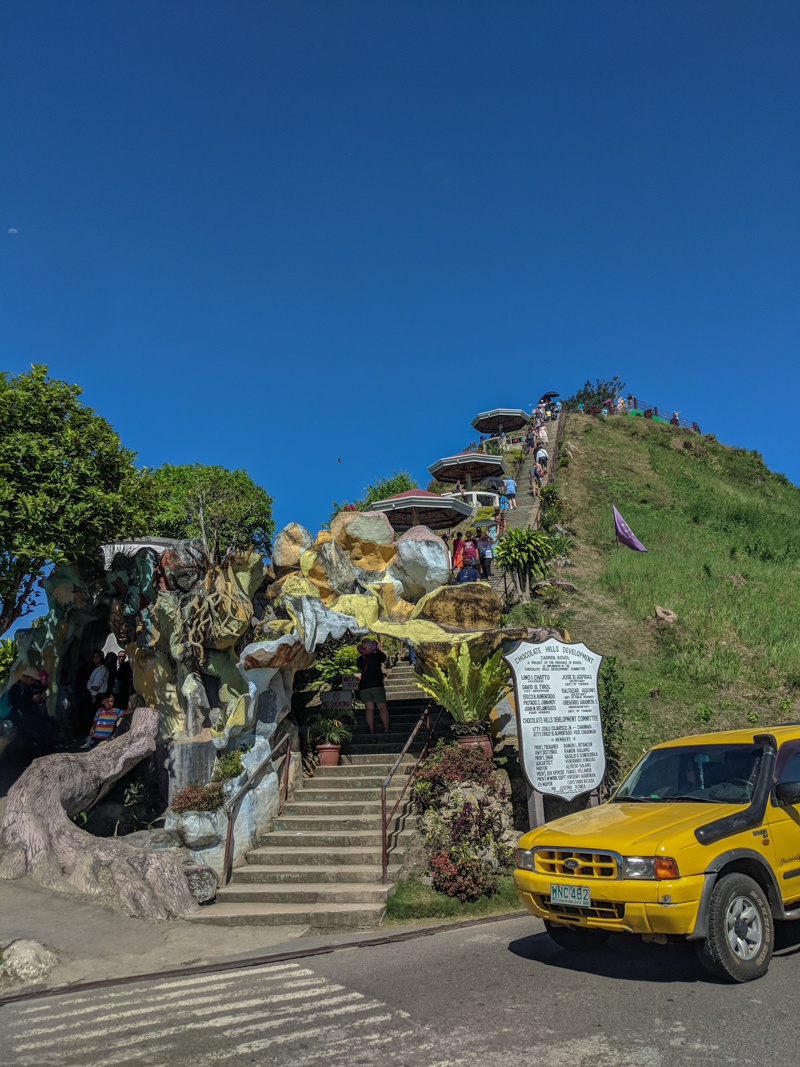 Once you get to the viewing area, you have to climb like 200 steps to get to the highest point. Overall, it only took half an hour to see what I needed to see. I asked the guides at the info center how to get to Tagbilaran.

“Same way you got here.”

“Then take the bus.”

I returned to the side of the road and flagged down the next bus that came roaring down the street.

Several hours later, I made it to Tagbilaran in time to get a frantic message from the pastor. The ferry we planned to catch to Cebu was sold out, and the only one we could make was leaving in 20 minutes. He gave me a pickup point, which I somehow navigated myself to. Several minutes later, a pickup truck came around and he yelled at me to jump in the back. We ended up making the ferry, barely. 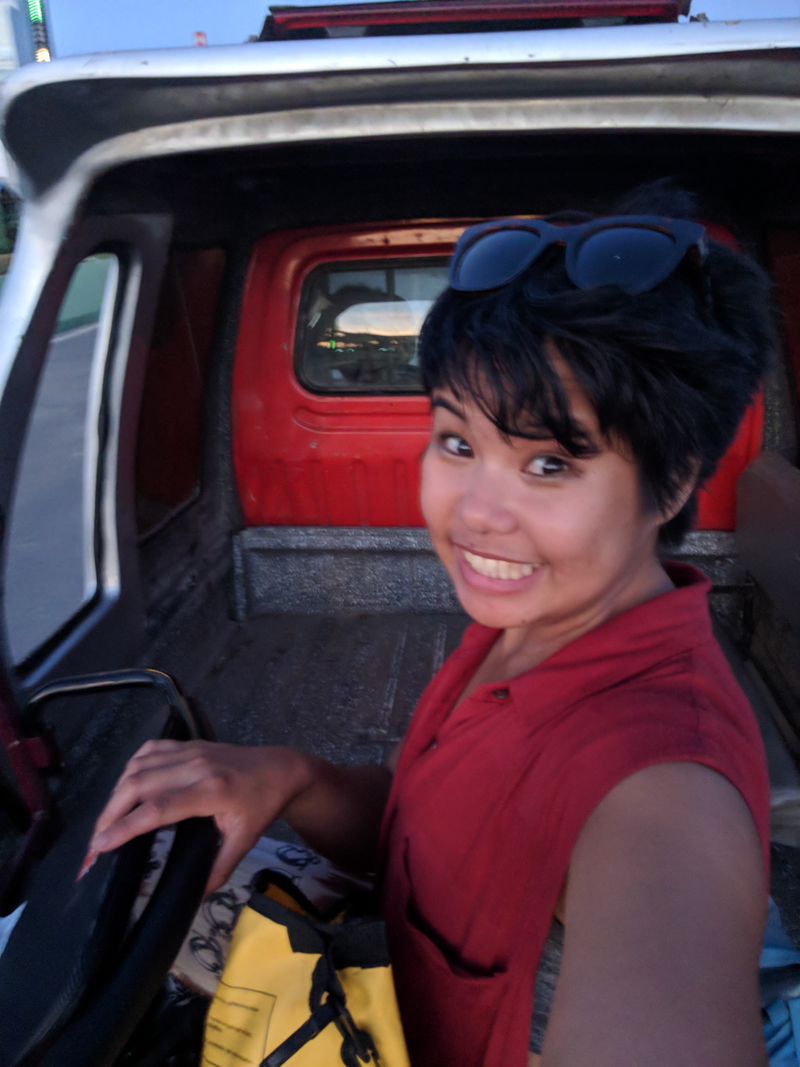 My time in Bohol was really the most Filipino of Filipino things I’ve ever done, and I’m so glad I did it. Who needs to hire professional tour guides when you have family friends, amirite?