Luang Prabang is a beautifully quaint town nestled between the Mekong and Nam Khan rivers. A UNESCO protected site, the city was the royal capital of the Luang Prabang province until 1975. It was briefly occupied by France in the 19th century when the French were trying to forge a path between Vietnam and China, so much of the old city is inspired by French architecture.

Luang Prabang is also home to 33 wats and Mount Phousi, a 100m hill overlooking the city.

I had booked two nights in Luang Prabang and a flight out of Laos on Thursday. You can easily get around the city with a bike, and most attractions are located in between the two rivers. 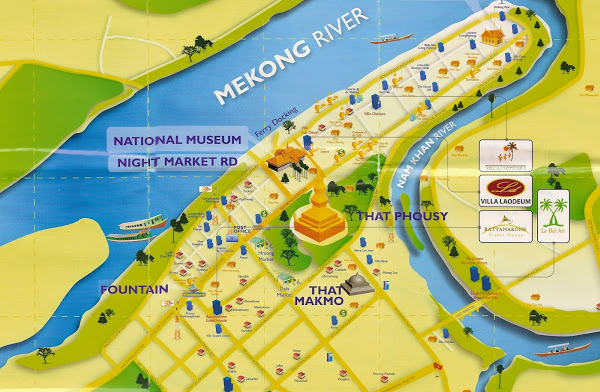 My plan to round out my trip was to take it easy (naps and massages!). After getting settled into my hostel around 5pm, I headed out Utopia for dinner.

Utopia is well-known among travelers as being a backpacker’s paradise. With a view overlooking the river, it’s a great place to chill out during the day and dance at night. 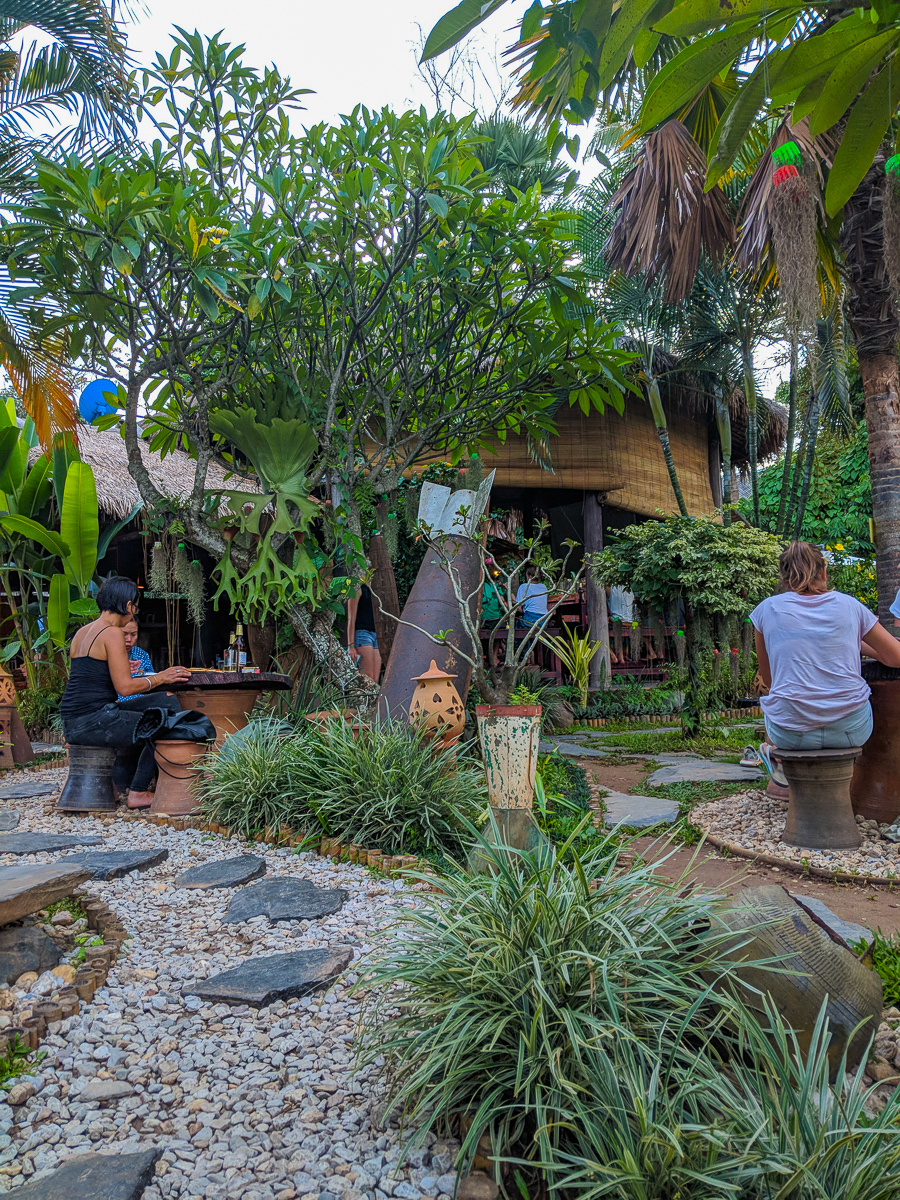 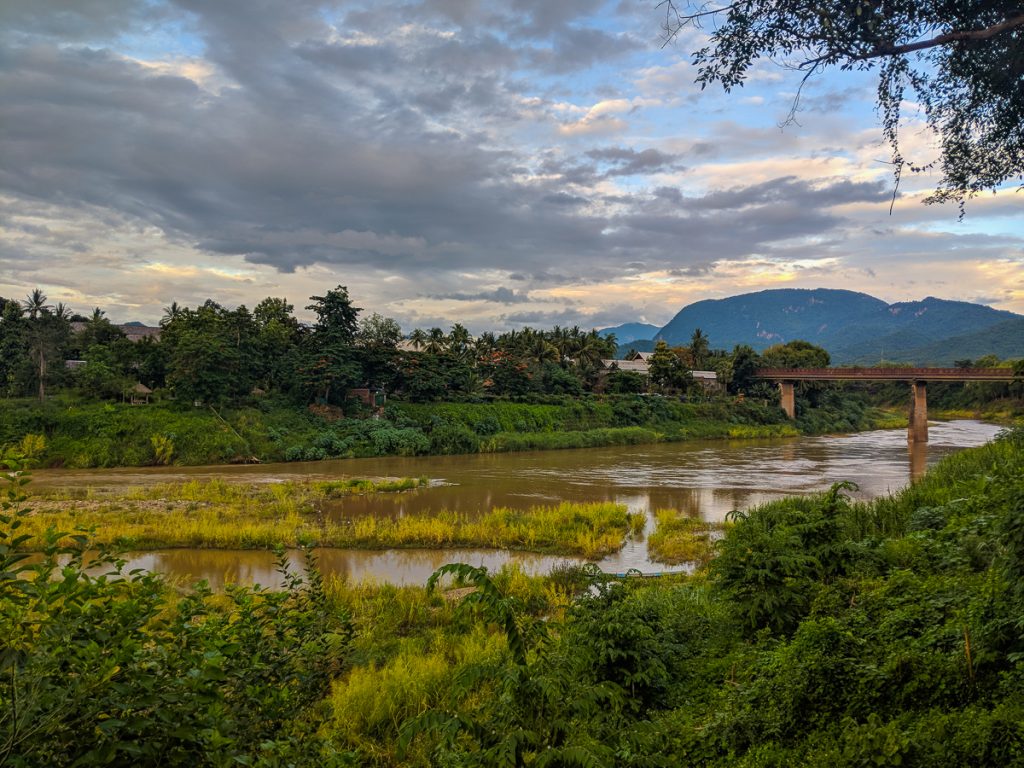 I wasn’t really feeling like dancing, so after dinner, I headed to a quieter spot nearby, Lao Friend Bar.

Lao Friend is owned by two Laotian guys who take the proceeds they make from the bar to rebuild the bridge and school in their village. I met another solo female traveler from France, and we spent the evening chatting away. Because of a city ordinance, all bars in Luang Prabang close at 11:30pm, so after last call, our server invited us to go clubbing with him outside the city district. My unofficial rule throughout this entire trip has been to always go where the locals go, so my newfound French companion and our Lao friend hopped onto a motorbike and headed to Dao Fah Night Club in the outskirts of Luang Prabang.

Clubbing in Laos is weird. Lao friend had also invited a brigade of his own Lao friends (none of whom spoke English) and although there was a dance floor near the DJ on stage, everybody was pretty much gathered at cocktail tables scattered around the club. The music was turned up louder than even in American clubs, so you couldn’t really hear anything around you, yet everyone was talking rather than dancing.

France and I were the only foreigners in the club, and probably the only people dancing, but we made the best of our time. The club supposedly closed at 11:30pm, but we were there until at least 1am when they started ushering people out.

After that, Lao friend and friends, France, and I all headed to a nearby… I don’t even know. It may have been a restaurant or it may have been someone’s house, but we were told to act inconspicuous and quiet. Lao friend offered to drive France and I to the Kuang Si Falls the next day, which we loosely agreed to.

Around 2am, we all returned to our respective homes… except mine was shuttered and locked. Actually, all of the guesthouses were completely shuttered and locked (foreigners aren’t given keys to the main entrance) and I couldn’t get into my building, so I ended up going to a bank down the street being guarded by a police officer. He kindly informed me that he didn’t speak English and continued playing a game of poker on his phone, and I curled up on the sidewalk in front of the bank and went to sleep.

Luckily, I wasn’t on the sidewalk for more than a few hours because Laotians wake up early, and the guesthouse was reopened by 4am.

After sleeping the entire morning, I did some investigating and found out that there’s a nationwide midnight curfew. It doesn’t apply to foreigners, but locals aren’t supposed to be out after midnight, which is why everything shuts down at 11:30pm (supposedly).

Lesson learned: If you’re going to stay out late in Laos, make arrangements with your guesthouse before going out.

Other popular nightlife attractions in Luang Prabang (most of these places “close” at 11:30pm, but the owners won’t kick you out. They’ll just lock the doors and close the windows, but service continues.):

In addition to cute cafes and temples scattered across the city, the aforementioned Kuang Si Falls is located within a 40 minute drive from the city center. However, France was not available to go on this excursion, and I was not up for a solo waterfall tour with Lao friend, so I made a hard pass and spent the day on my own.

I switched things up and booked a private room with a river view at Villa Kingkham Riverside, got the best massage of my life at the place next door, then crossed the bamboo bridge over the Nam Khan River to Dyen Sabai Restaurant for a late lunch. 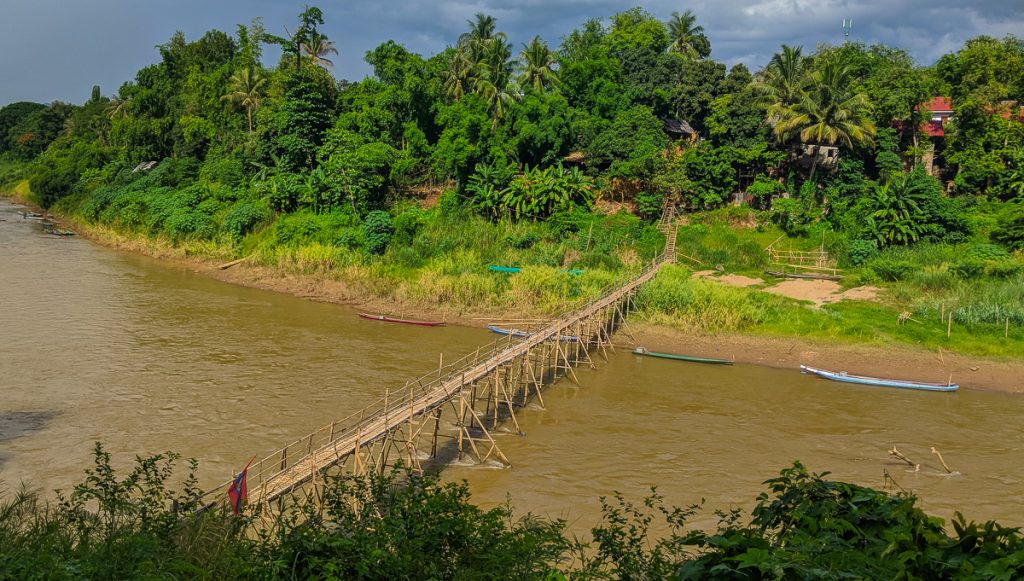 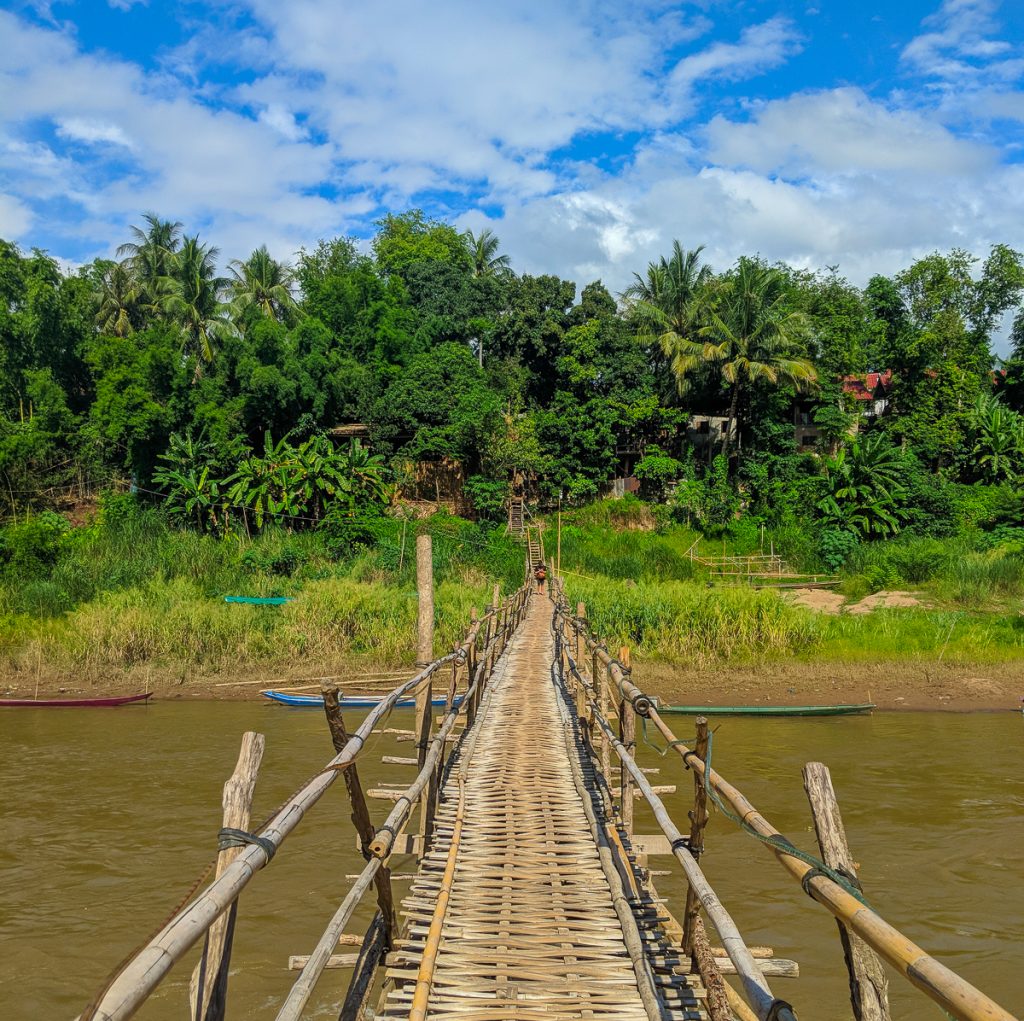 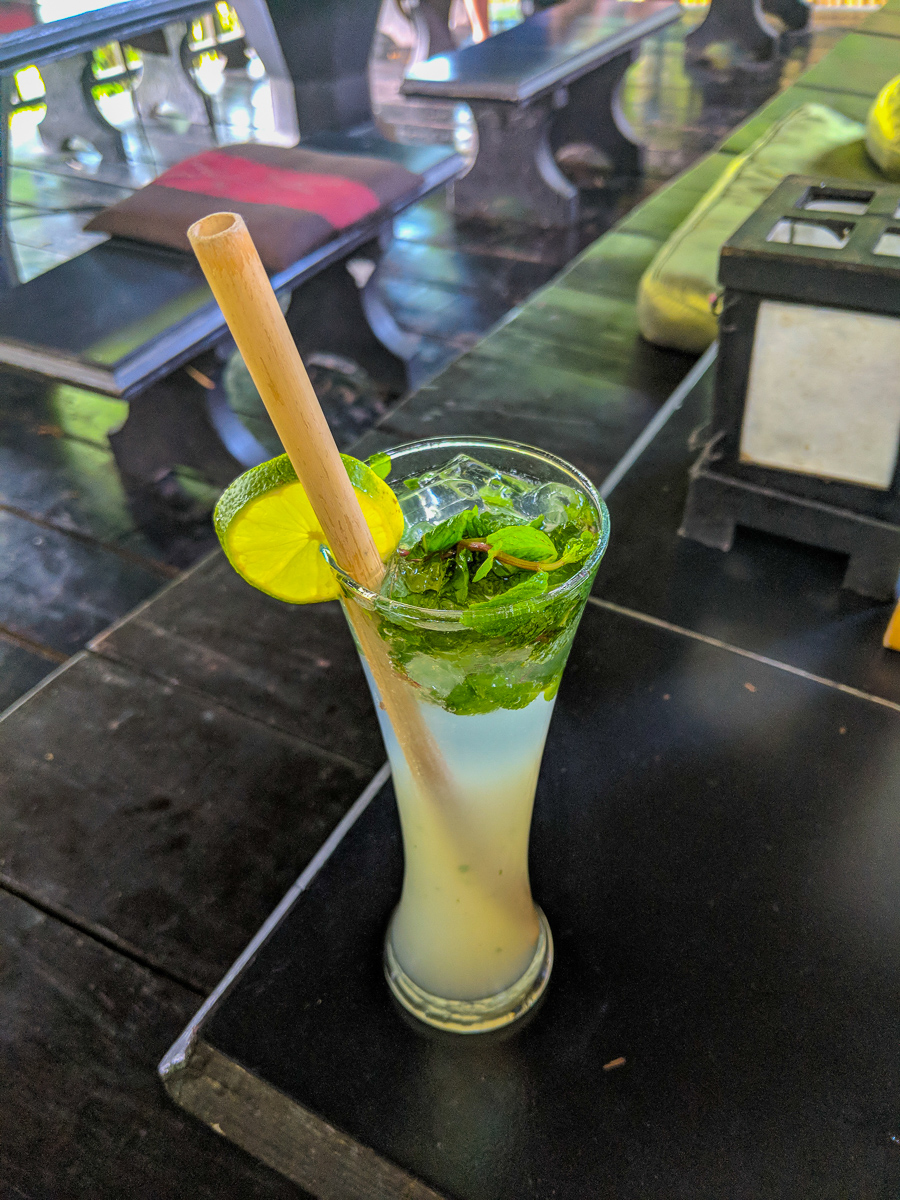 I highly recommend Dyen Sabai. It’s situated next to the river, and has excellent fondue and a really nice vibe. After lunch, I took a three hour nap at the restaurant (because that’s what you do in Laos), then crossed the bridge back to my guesthouse. I grabbed dinner at Red Bull Bar and Restaurant, then turned in for an early evening. 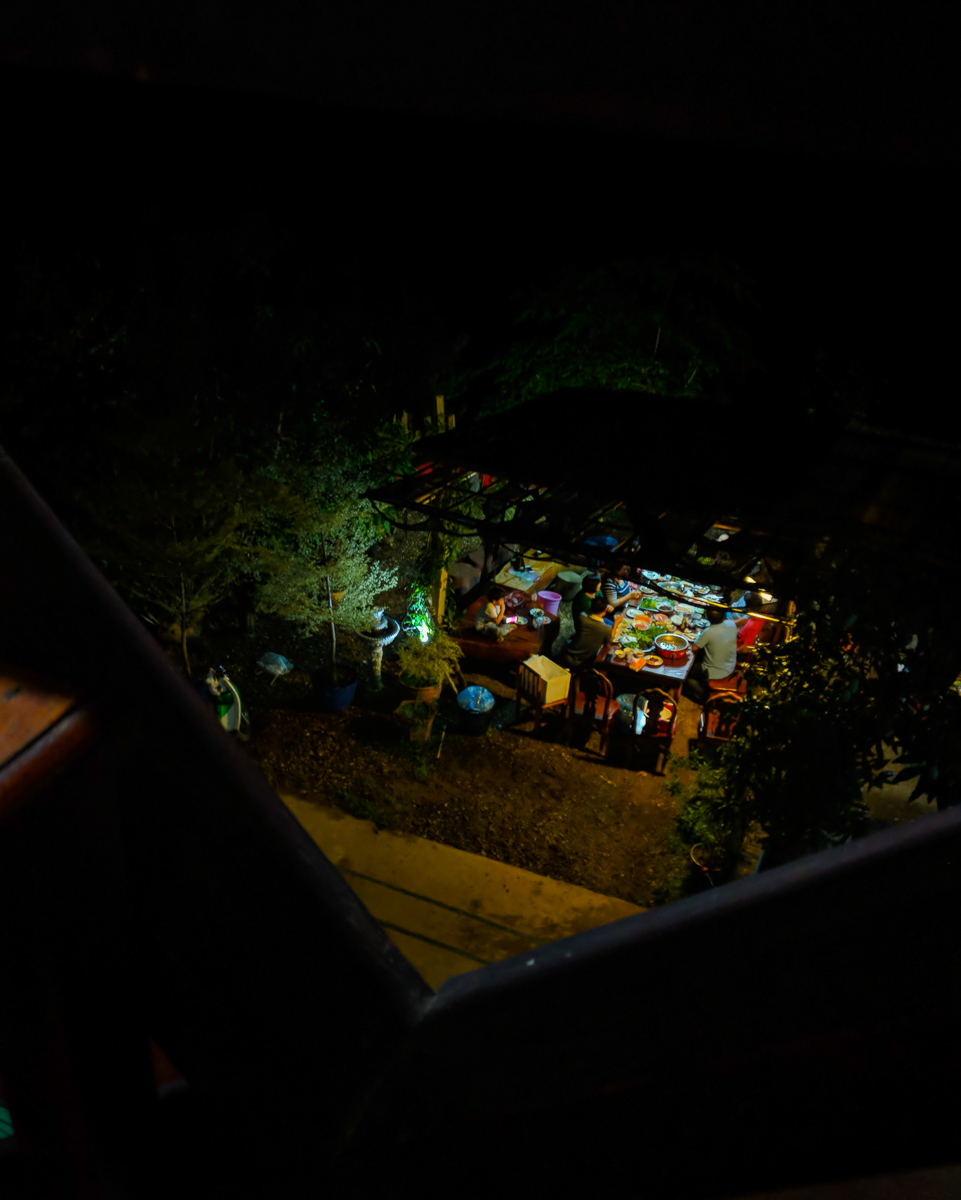 My flight out of Luang Prabang didn’t leave until 3pm the next day, so I spent the morning climbing Mount Phousi and visiting the Wat Tham Phousi temple located at the top of the hill. The young monks jammed to Si’s Gangnam Style at the temple entrance, which was thoroughly entertaining. 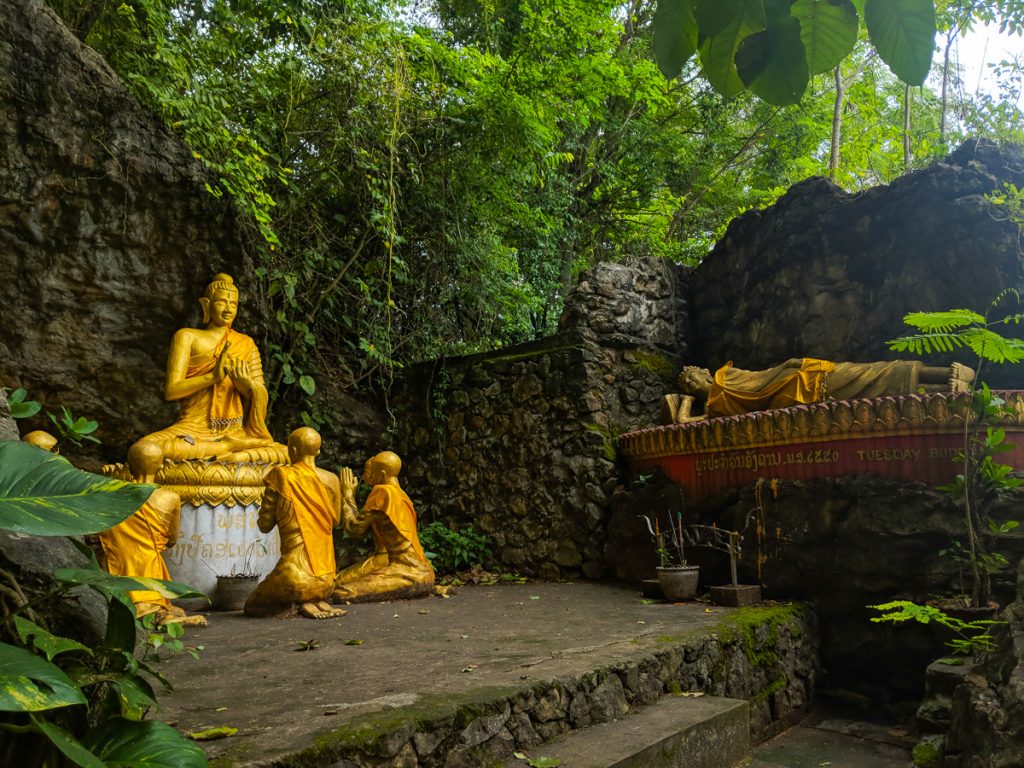 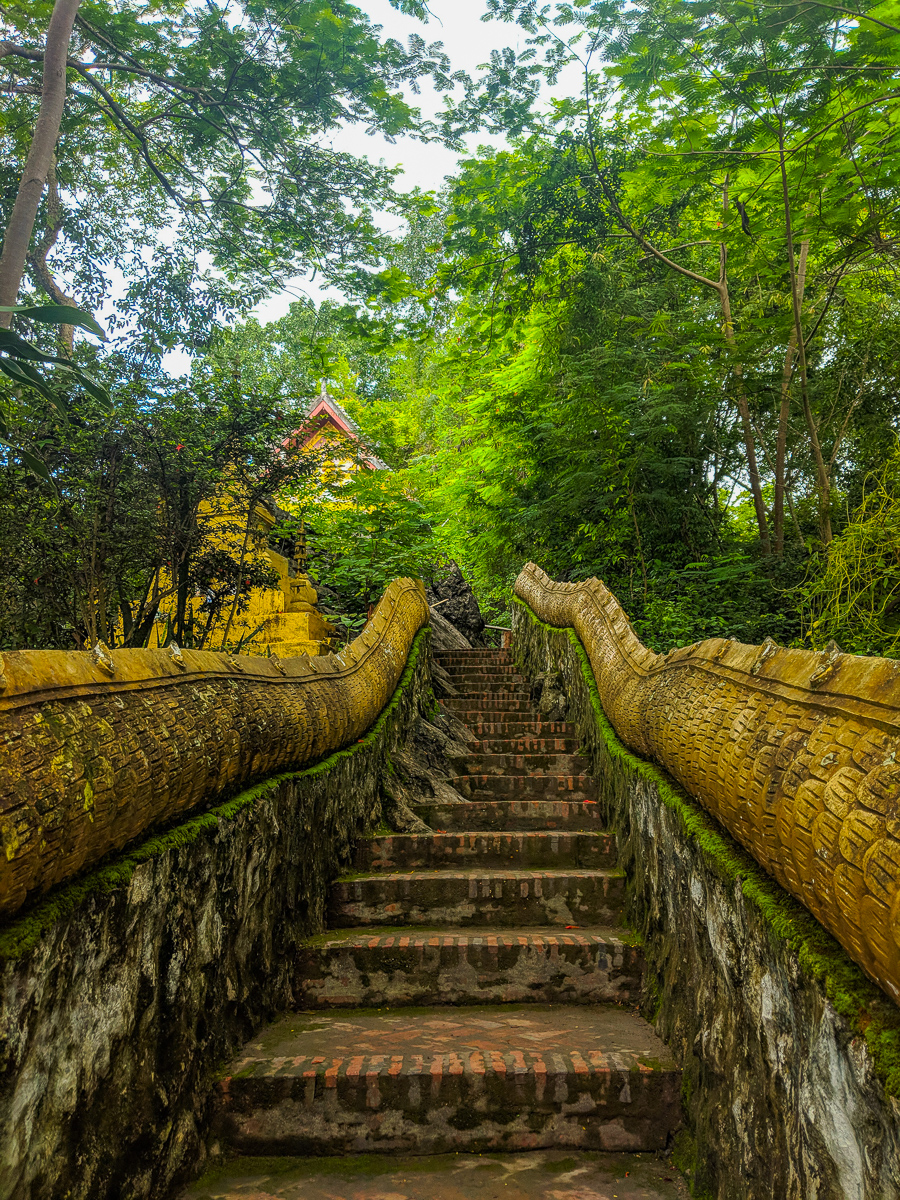 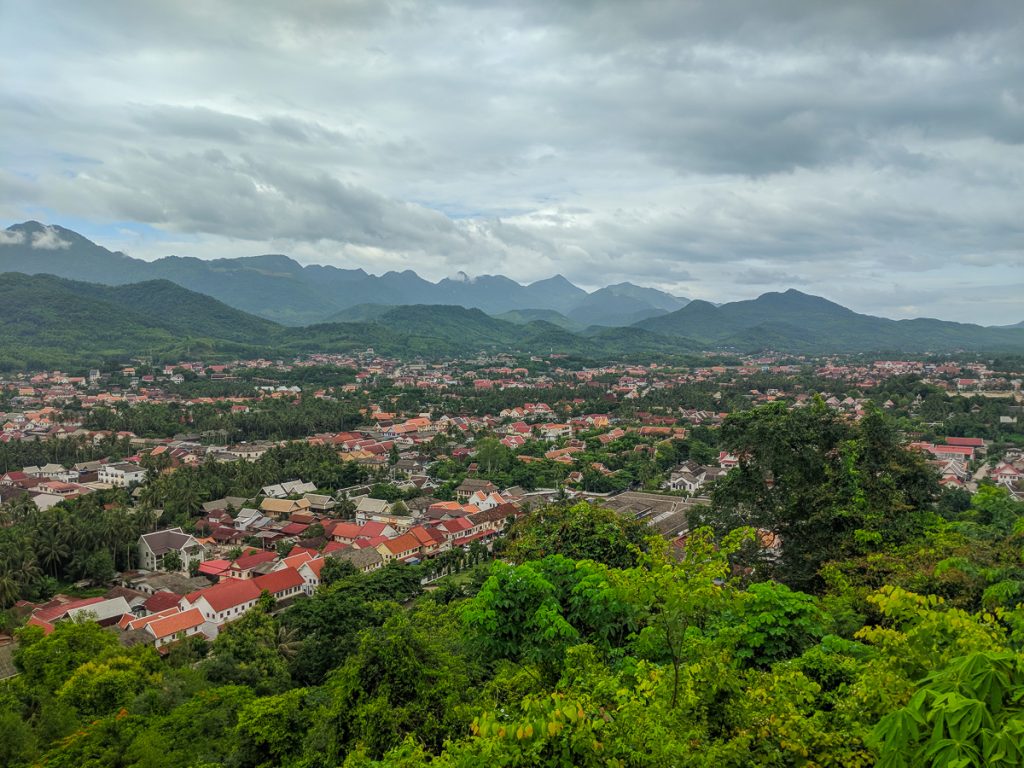 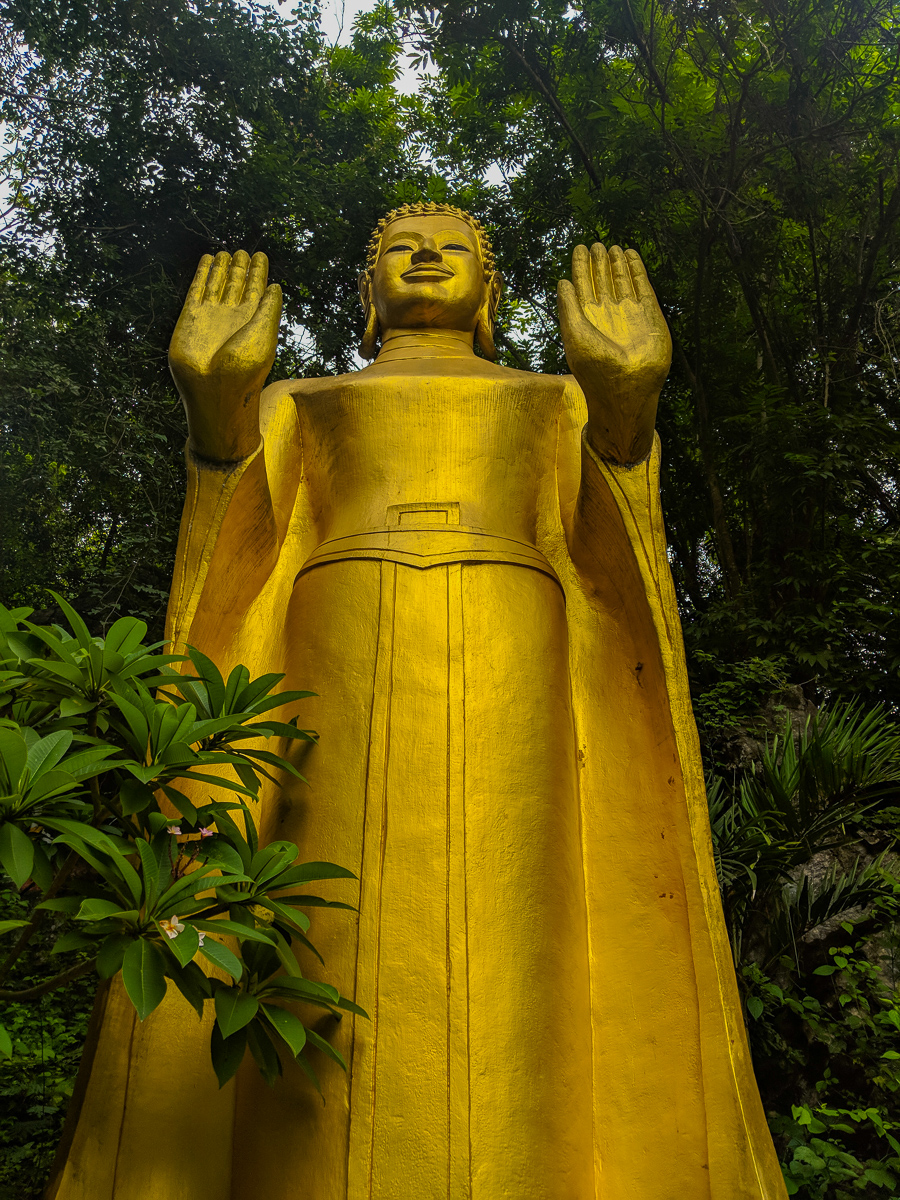 The temple has a nice view overlooking the city. From there, I walked to the daytime market and then checked out the Royal Palace Museum. Laos is definitely an interesting place. It’s one of the few remaining Communist states, and when the communists took over in 1975, they sent the royal family to reeducation camps and converted the palace into a museum. 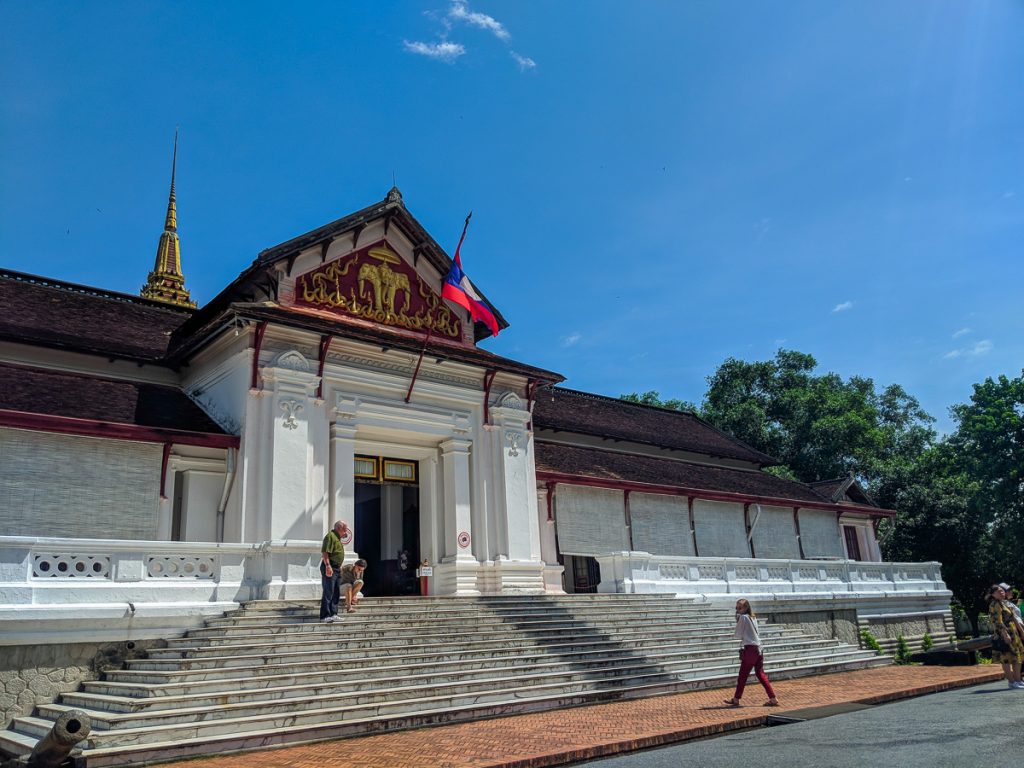 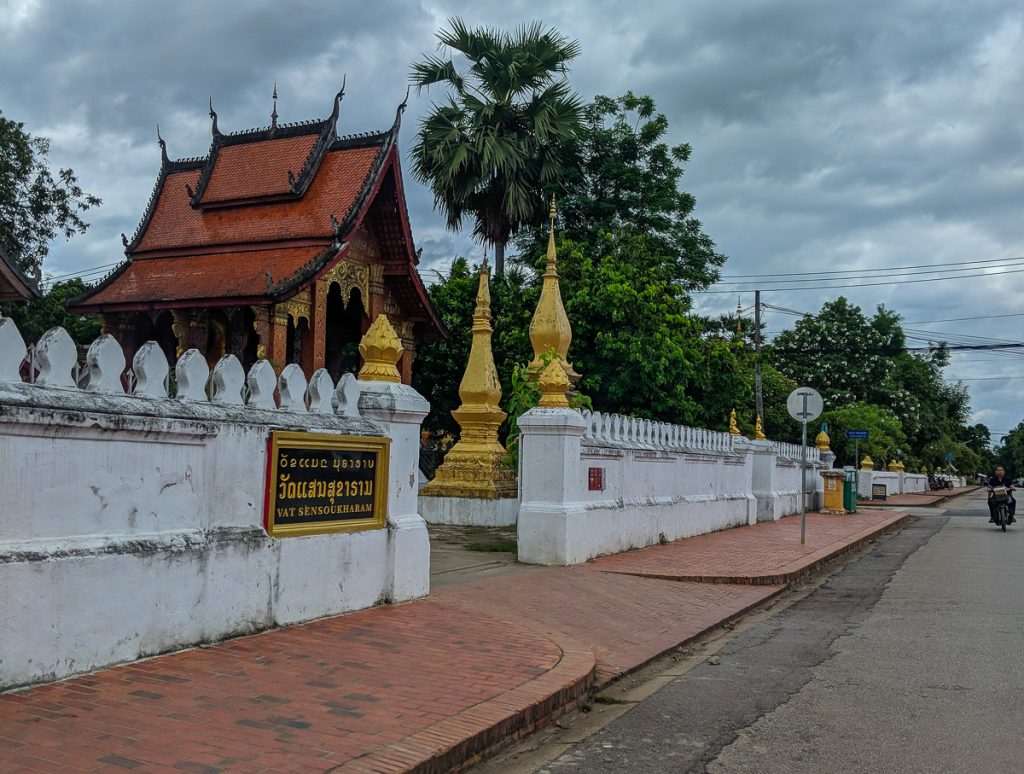 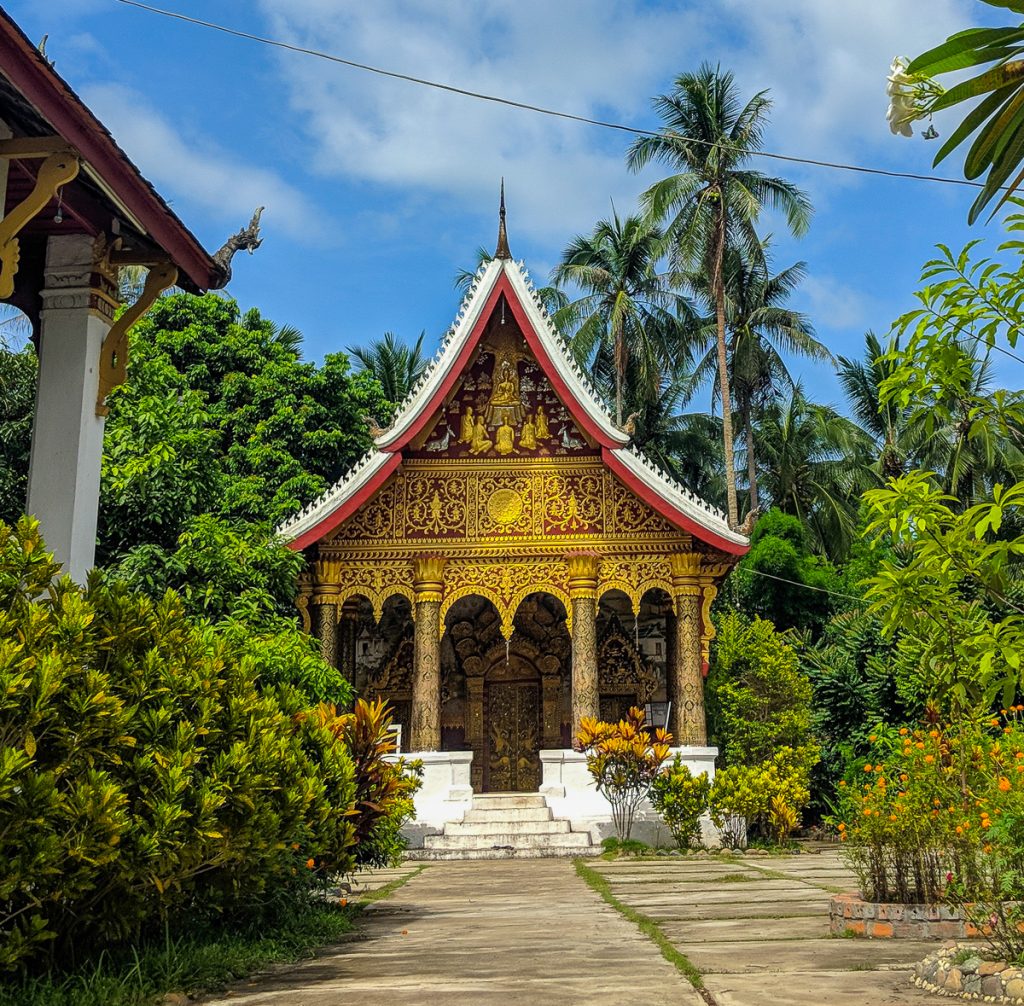 Overall, I really enjoyed Luang Prabang and Laos. Laotians are among the funniest and friendliest people I’ve ever met, and I’m completely bummed I didn’t get to visit Vang Vieng or Vientiane on this go-around.

If you ever have the opportunity to visit Laos, definitely do more research than I did on national laws. Laotians also seem to pick and choose which laws they want to follow. For instance, drugs are illegal across the country, but many restaurant owners work with the government to sell drugs to foreigners so that the police can later arrest the foreigners for possession and take bribes so that the foreigners stay out of jail.

Also, use your best judgment when it comes to safety. Hundreds of tourists have died in Vang Vieng  because of alcohol poisoning, drunken tubing shenanigans, and rope swinging into shallow water and sharp rocks (though things are more regulated in present day and most of the river bars have shut down). Bottom line, Laos tends to be more reactionary than precautionary. But it’s still an awesome place to visit.

Mango is ten weeks old today! 🧁 We've had her f